Maybe one day there will be a Langhorne or a Twainie award, and you will deservedly win. — Art Dorland, Veterans for Peace, Cleveland chapter

Your work is vital to the movement! — Will Griffin, past VFP national board member, publisher of "The Peace Report"

I saw your "Truth in Recruiting" video. So funny, and so true!" — Adam Dowd, Veterans for Peace, Chicago chapter 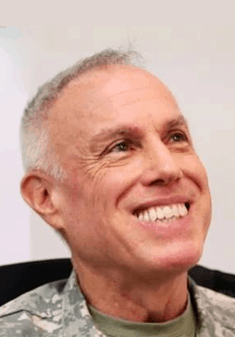 The purpose of these films is to help people to think a bit more deeply about this thing we call war, which is the killing and maiming of our fellows, and the death and suffering of young people in uniform in the name of lofty goals, but which always involves money and power and greed. But rather than convey my message through the dark lens of gritty documentaries, I choose to use humor.

With 22 awards and 130 festivals, I’m done making short films now. I’m forging ahead to writing all types of comedies, including one in Japanese to be filmed in Japan. I’m also writing the true life story of a friend of mine who was a soldier in Iraq. It’s not an antiwar film, just a true telling of his experiences. It is of necessity a dark comedy. See “Sergeant Meat” on my main site.

“When people speak to you about a preventive war, you tell them to go and fight it. After my experience, I have come to hate war. War settles nothing.”

“To my mind, to kill in war is not a whit better than to commit ordinary murder.”

“All war must be just the killing of strangers against whom you feel no personal animosity; strangers whom, in other circumstances, you would help if you found them in trouble, and who would help you if you needed it.”

“Mankind must put an end to war, or war will put an end to mankind… War will exist until that distant day when the conscientious objector enjoys the same reputation and prestige that the warrior does today.”